A federal appeals court delivered a sharp blow against Texas’ voter ID law Wednesday, but the bottom line is that a newly shaped law by Election Day will be difficult to achieve, and short-term at best, says appellate attorney Chad Ruback.

The 5th U.S. Circuit Court of Appeals in New Orleans sent the case back to the federal trial court in Corpus Christi, Texas, with instructions to devise an order that would implement portions of the law to remove its “discriminatory effect. The 5th Circuit’s opinion orders the lower court not just to correct portions of the law identified as discriminatory, but to do so in a way that causes as little disruption as possible for the approaching election,” Mr. Ruback says. “That’s an enormous challenge. Both sides in the case are far apart in their positions, and there does not appear to be an easily identified middle ground.

The appellate court went so far as to fault members of the Texas Legislature for being aware of the law’s negative impact on minorities but nevertheless passing the legislation without adopting “measures that might have lessened this impact. It is far from certain that the trial court judge will actually have an opportunity to craft voter ID rules before the election, as the state of Texas could appeal to the U.S. Supreme Court and seek a stay. And even if the Supreme Court does not grant emergency relief, Texas will likely seek appellate review of any voter ID rule changes imposed by the trial court judge for November’s election. Whatever law the state has in place on Nov. 8, it likely will only last until a long-term solution can be devised—by the trial court judge or by the Texas Legislature—that will pass appellate scrutiny. 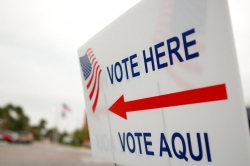