Employment Attorney: NFL Players Can Be Fired For Political Protests 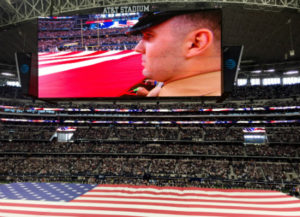 President Donald Trump has a solution to stop football players from taking a knee in protest during NFL games.

The NFL has all sorts of rules and regulations, Mr. Trump said in a tweet this week. “The only way out for them is to set a rule that you can’t kneel during our National Anthem!

This is no different than employers prohibiting employees from smoking at the office or outside of the office, said Mr. Dunn, a partner at Clouse Dunn LLP.

From London to Los Angeles, more than 100 pro football players defiantly knelt or locked arms before games on Sunday and Monday. Many did so following Mr. Trump’s harsh criticism at a campaign rally in Alabama late last week.

Wouldn’t you love to see one of these NFL owners, when somebody disrespects our flag, to say, ‘Get that son of a bitch off the field right now. Out! He’s fired. He’s fired!

While last weekend’s wave of protests were a show of solidarity against President Trump, former San Francisco 49ers quarterback Colin Kaepernick actually sparked the movement in 2016 by sitting on the bench during the national anthem to put a spotlight on the victimization of African-Americans by police.

Regardless of the cause, Mr. Dunn said more employers are regulating employees’ actions inside and outside of work.

An employer can regulate employees’ actions at the office and outside, including limiting their political activities and firing them for speaking out or protesting, he said.