Elle Woods of ‘Legally Blonde’ Movies Inspired This Lawyer, Others to Legal Careers 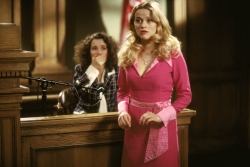 Actress Reese Witherspoon, who played the beauty-and-dating-absorbed sorority girl turned clever Harvard Law grad in the “Legally Blonde” movie series, was quoted last week saying that women often tell her they went to law school because of her character.

Kelsi Stayart White, a commercial trial lawyer at Ahmad, Zavitsanos, Anaipakos, Alavi & Mensing P.C., or AZA, in Houston, said that happened to her too. It’s funny because although Elle Woods’ character isn’t your stereotypical idea of a feminist, the message of the movie is feminist: you can achieve anything you want to simply by being the best version of yourself, said Ms. White.One reason the movie made me interested in law school is that it presented Elle’s differences as her strengths. She was a good lawyer, in part, because she was a woman, not in spite of it, she said. I think the best part of the movie is the end of her commencement address at Harvard. She says, ‘most importantly, you must always have faith in yourself.’ I think of that line often, even today as a practicing lawyer!” Ms. White said.

For more information or to set up an interview, contact Mary Flood at 800-559-4534 or mary@androvett.com.