Dallas Trial Attorneys Nominated for Texan of the Year 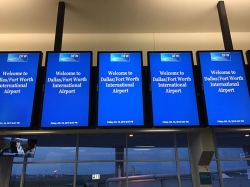 Trial attorneys Chris Hamilton and Paul Wingo of the newly formed Hamilton Wingo law firm spent the first part of 2017 helping immigrant detainees held at Dallas-Fort Worth International Airport during President Trump’s travel ban. Hours spent at the airport assisting detainees with their legal rights led to the formation of Lawyers for America, a nonprofit organization that provides legal assistance to people whose rights have been violated. Their hard work and dedication haven’t gone unnoticed, as both attorneys have been nominated for the Dallas Morning News Texan of the Year. The Dallas Morning News Texan of the Year allows community leaders to nominate individuals who made a significant impact in 2017. The winner is announced December 31.

It’s a tremendous honor to have someone say your name in this context,” said Mr. Hamilton. The true heroes are the people who came to this country and had the courage to fight through the roadblocks the system created. We only made sure their rights were protected. Chris and I fight for the same causes, said Mr. Wingo. We partnered this year to continue fighting for justice and help people who have been legally wronged. To be nominated for Texan of the Year means so much.