Breaking Through the Noise

Aldous \ Walker, an elite plaintiff’s firm known for representing clients in difficult, life-changing cases, asked us to assist with a particularly sensitive and high-profile case. Charla Aldous and Brent Walker were representing a victim of sexual assault. As a rule, such stories can be difficult to tell. What’s more, the victim was underage, a high school student.

At Androvett, a number of our team members are former reporters, which makes us the perfect conduit between attorneys and the press. We’re fluent in the languages spoken by both and understand how to help a story find its audience. We met with the firm so it could tell us more.

Isabella Fletcher had been a high school freshman for only a few weeks when the unthinkable happened. She was raped by two football players at a party on September 28, 2012. Isabella and her family soon were confronted with the reality that finding justice would be an uphill battle. The football players claimed that what happened had been consensual. And an administrator in the Lewisville ISD, in which Isabella’s school was located, told her parents it would be tough “going up against the football team,” and recommended their daughter transfer schools. Isabella faced constant bullying from her classmates. With no other options left available to them, it became clear they would need to hire an attorney and begin the arduous process faced by so many other victims of sexual assault.

In all, there were two court cases. The first, a Title IX retaliation case, was tried in U.S. District Court in Sherman against Lewisville ISD for failing to protect Isabella after it learned what happened to her. At each step of the process, we provided assistance not only in sharing the story with the media, but also providing proper context so reporters – and the public – understood what was happening.

The beginning of the trial: On day one, we were at the courthouse listening to opening statements. This helped us to better understand the case both sides were attempting to make, as well as the main takeaways we could then communicate to reporters.

During the trial: Our process was the same for key testimony delivered throughout the trial. There’s a lot of information presented in any court proceeding, and our job is to condense that into something that’s easy to follow.

The end of the trial: Unfortunately, the jury came back in favor of the school district, not Isabella. While this was not the result we hoped for, we communicated it to local outlets as quickly as possible. We also worked with the attorneys to determine what they wanted to say, and could say, that would be both supportive of their client yet respectful of the process.

While the jury result wasn’t what Isabella and her family were hoping for, the news coverage did help her tell her story. It made clear what had happened to her and how various institutions had failed her.

The modern news cycle moves fast. Big stories capture an audience’s attention only to be forgotten the next day. This means the window one has to get information out is very small. And if someone gets there before you, your chances of making any sort of meaningful impact are even smaller. By providing a real time commentary on what was happening in the case, we were able to shape the narrative in a way that explained exactly what Isabella experienced, not only on the night of the incident, but in the ensuing weeks and months. This was picked up and reported on by publications across Texas. Some of these, such as TheDallas Morning News, have readerships that extend far beyond the state.

For Isabella and her family, the verdict was devastating. And adding insult to injury, after the trial, the school district filed a motion for costs with the court, demanding that Isabella pay over $17,000 in legal fees billed by the school’s attorneys. Here’s a girl who’s had her life blown apart by this tragedy, and after losing in court, the defendants’ attorneys jump at the first opportunity to kick her while she’s down.

But, in a move that became her first sign of hope, the federal judge who had presided over the case denied the attorneys’ request, offering a stinging and very significant rebuke: 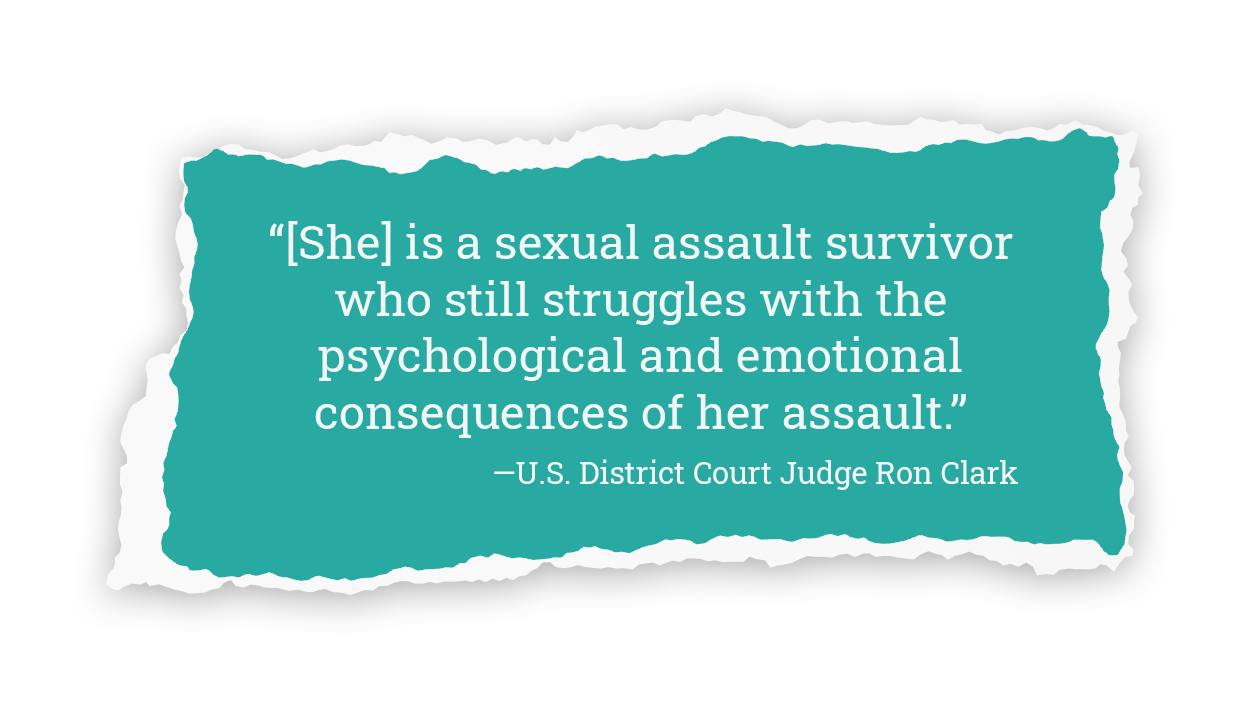 The wording used here is important because, although she had lost the case, the judge was, in effect, acknowledging the validity of Isabella’s claim. She had been sexually assaulted, and the verdict handed down by the jury was not a refutation of that. The fact that the judge chose to use this particular language was significant in itself, and something we wanted the media to be aware of. We pointed reporters to the request for costs and the judge’s response and that prompted additional coverage.

But the loss in federal court was not the end of Isabella’s case. There still was the matter of a state court claim, one that Charla and Brent had brought against the young men who had attacked Isabella.

Once again, there was a trial and once again, Isabella had to tell her story. But this time, in a case of civil sexual assault, the jury ruled in her favor.

After the trial ended, The Dallas Morning News asked Charla if it could send a reporter to interview Isabella. They agreed, and we were on hand to help with the preparation.

Given the setting, we determined that it would be best to meet with Isabella beforehand to discuss what she could expect and to let her know she was under no obligation to answer any questions that made her uncomfortable. We shared questions we believed the reporter was likely to ask, as well as details Isabella would want to speak to that would help the reporter put together her story.

The interview was by no means easy, for even after a jury finding in her favor, discussing what had happened was another trauma. But Charla felt it was a good idea to do the story, that in a way, it might help with the healing. We met with her, Isabella and Isabella’s mom and dad in advance and gave them an idea of what to expect. We knew the reporter and knew she would be empathetic, smart and sensitive. And while the interview was a challenge, the resulting story was – like the verdict – another triumph.

There are many ways to tell a story. Press releases and interviews can be very effective, but if the story isn’t being told in a way that resonates with people, it won’t get very far. Cloaking a story in a legal proceeding adds another layer of complexity.

A big part of our job is to serve as translators. Our experience working with both attorneys and reporters helps us do that, to cut to the heart of the matter in a way people will understand and care about. We helped Isabella tell her story by serving as an advocate for her and her attorneys. What story do you need to tell?